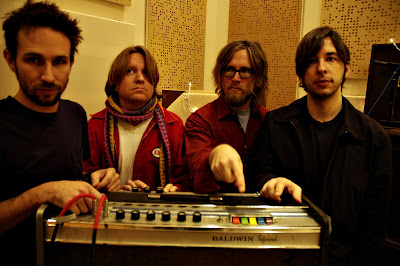 One of my favorite working bands is Denton, TX's Centro-Matic. Led by the hyper-prolific songwriting of Will Johnson, the band, and all its various incarnations, have released no less than 12 full length albums since their inception way back in 1995, as well as a smattering of singles and EPs in that time. Their most recent full length was last year’s excellent Fort Recovery, which found the band at its most cohesive and accessible while still remaining true to their garage/roots/folk-rock background.
Looking back over the Centro-Matic catalog it’s amazing to me just how consistent each record is. It’s hard to pick a favorite, or one that doesn’t quite live up to the high standards the band has set for itself. Their early LPs, like Redo The Stacks (probably one of my 50 favorite albums of all time) and The Static Vs. The Strings, are just as likely to bristle with loud distorted guitar rockers as they are to sooth with earnest acoustic ballads. The band often found themselves compared to Guided By Voices during these years, more I think for the staggering amount of songs they put out than any glaring similarity in sound (Will Johnson always seems more influenced by an “American sound, whereas Pollard never hid his love of the British Invasion). These records led to a mid-period of more focused albums such as All The Falsest Hearts Can Try (2000), Distance and Clime (2001), and Love You Just The Same (2003). Each featured slightly stronger production values than the one before it without sacrificing the fuzzy grit that I loved.
It was around this time that the band members started releasing records under various side projects. 1999’s Navigational was billed as Centro-Matic, and featured the original band members, but is now largely considered the first South San Gabriel album due to its gentler soundscapes. This sound became the trademark of 3 later SSG releases, South San Gabriel Songs (2001), Welcome, Convalescence (2003), and The Carlton Chronicles (2005). Johnson has also released 2 acclaimed solo albums - Murder of Tides (2002) and Vultures Await (2004) - that focused more on the singer-songwriter side of his talent.
Centro-Matic is a treasure of an American rock and roll band, and if you haven’t yet checked them out then today is your lucky day. They’ve always hosted numerous mp3s on their website and I’ve gone through and rounded them up here in one convenient place. If nothing else, it’s worth it just to hear how effortlessly they use feedback as an integral part of many of their songs - better than any other rock band I can think of and constantly buzzing out of the speakers. But there’s so much more here than that. Magnet magazine, when reviewing Love You Just The Same, said it’s “what a trucker cap would sound like if it could sing. Oh, and play violin” and I can’t think of a more accurate description. Check this band out:
MP3 :: Triggers And Trash Heaps
(from Fort Recovery)
MP3 :: Flashes And Cables
MP3 :: Argonne Limit Co.
(from Love You Just The Same)
MP3 :: Janitorial On Channel Fail
MP3 :: To Unleash The Horses Now
(from Distance And Clime)
MP3 :: Most Everyone Will Find
MP3 :: Huge In Every City
(from All The Falsest Hearts Can Try)
MP3 :: D. Boon Free (A Ninth Grade Crime)
MP3 :: Now That You’ve Blown Away The Cards
(from The Static vs. The Strings)
MP3 :: Numbers One And Three
MP3 :: The Massacre Went Well
(from Navigational)
MP3 :: The Dark Of Garage
MP3 :: I Am Six Pounds Of Dynamite
(from The Carlton Chronicles)
MP3 :: Smelling Medicinal
MP3 :: Saint Augustine
(from Welcome, Convalescence)
MP3 :: Glacial Slurs
MP3 :: Ninety Secretaries Down
(from Songs)
MP3 :: Karchers Contacts
MP3 :: Murder of Tides (Westerlies)
(from Murder of Tides)
Buy all of these titles and more HERE
----------------------------------------------------
Posted by James at Thursday, November 15, 2007

I enjoyed your reviews.Do you owe the 'headwound' portion of your blog's name to Centro? Their songs are published under 'the headwound was a setback'(C). I always get a kick out of that name...
JK

Thanks for the kind words. sadly, I do not owe the name to Centro-Matic, but rather the 13 stitches I had in my head at the time I started this blog.

I too have always enjoyed that name for C-M's copyright.