[Interview] The War On Drugs 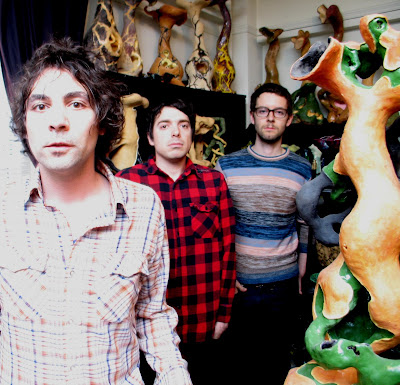 As we approach the end of June, the official halfway point of 2008, it’s safe to say that Wagonwheel Blues, the striking debut from The War On Drugs, ranks pretty high among my favorite albums of the year. Singer/songwriter Adam Granduciel and band have crafted a record full of thick, noisy, passionate rock ’n roll that echoes the heroes of classic rock radio while still managing to sound refreshingly original. I caught up with Adam via email and he was kind enough to take a few minutes to answer some questions about the band’s interesting name, the creative process, and his many diverse influences:

PHW: Hey Adam. First off, what was the reason behind naming the band The War On Drugs?

Adam: No real reason really...my friend Julian and I came up with it a few years ago over a couple bottles of red wine and a few typewriters when we were living in Oakland. We were writing a lot back then, working on a dictionary, and it just came out and we were like “hey good band name” so eventually when I moved to Philadelphia and got a band together I used it. It was either that or “The Rigatoni Danzas.” I think we made the right choice. I always felt though that it was the kind of name I could record all sorts of different music under without any sort of predictability inherent in the name...kind of mysterious—but you HAVE TO have the “The” in there...

PHW: The first thing I noticed about Wagonwheel Blues was how fully realized it sounds - not at all like a typical debut. How did that come to be?

Adam: Thanks man. Well the songs on this album each have their own little time frame spanning over the last 6-7 years. Boulders, Farm and Urgency were all started in the 2006 sessions with the Cobbs, Barrel of Batteries is from 2001, Buenos Aires from 2005 and Needle, Reprise, Coast and Reverse the charges were all done in late 2007/early 2008. Songs went through tons of transformations and approaches. For a long time we were doing a version of ‘Needle’ that was real slow and about 9 minutes long...it was great live, usually just myself and Kurt, but it didn’t seem to have the same impact when it hit the tape. The version of it on the album was done in one session about one week before I had the record mastered. I did the organs at home over the sampler and all these loops and then brought the reels to Jeff’s (we have the same tape machine) and did the drums and vocals the next morning. All of a sudden this new version made so much sense to me. All the songs were recorded to tape, sometimes dumped to pro-tools and overdubbed, then moved back to tape and mixed. ‘No Urgency’ was done in about 5 different studios. Songs were all mixed by different people...myself, Jeff, the Cobbs and Brian McTear—all with different gear. Most of it ran through Jeff’s SSL G-series bus compressor which adds an amazing shine to all of it. There are sounds on these songs from over 8 years of home recording...bits and pieces here and there...dumped from cassettes, minidiscs, samplers, rough mixes run thru amps and sampled etc...but most importantly all the performances are fresh and invigorating. Everybody was really getting behind each song when we were working on them. In the end, every song ended up with it’s own special energy and charm while many of the themes seemed to have remained fairly consistent in a way...

PHW: I don't get the sense from your music that you guys are a new band. There seems to be too much, I don't know, vision, behind what you're creating - how long have you been playing together?

Adam: I met Kurt in 2003 and we began playing together constantly...not so much in band form but just staying up late fingerpicking, strumming, making recordings in my house, his house, sharing books, gear and records. We’d go on week long recording benders—15-20 hours a day or so...by the time we started making The War On Drugs recordings together that show up on this album playing together had become so natural. I’m so comfortable with Kurt’s, Dave’s and Charlie’s sensibilities towards music that I feel at ease letting them do what they want in the studio and live. ‘Show me the Coast’ was pretty much recorded live by myself and Kurt in 1 take at Jeff’s studio....2 guitars and vocals over the sampler....all pretty much improvised then I overdubbed the snare and we each added another guitar and piano. The whole recording of that song took about 6 hours. The version on the album is actually a rough mix from the end of that night’s session. That’s the kind of song that just happens...it can’t be written beforehand, you can’t plan the dynamics..it has to exist in that immediate form. Then, live we can take it to new heights. AND WE DO!!

PHW: Giving away the Barrel of Batteries EP for free seemed to be a smart strategic move with the full length coming out so soon after. Was that your decision or your label's (Secretly Canadian)?

Adam: That was their idea and at first I was a bit hesitant cuz the Ep just felt a bit old to me but they really latched onto those recordings from the start so they thought it would be a good idea. It really was a great idea and definitely helped get the word out about the full length. The original Ep had an acoustic version of ‘Arms like Boulders’ and they decided to use the Brian McTear mixed version of the full band one...a different mix than the one on the album. Those guys have been real champions of all the recordings I’ve given them over the last year or so and I’m just real fortunate to have them be the ones putting out my records....they’re the best dudes around.

PHW: It's well documented that Springsteen and Suicide are big influences on The War On Drugs. What other music inspires you guys?

Adam: Yeah totally...We listened to the Velvets’ Quine Tapes on the last tour—a different Sister Ray as we entered each city. But yeah...Neil Young, Coltrane, Dylan, Classic rock radio stations, the blues, The Fall...tons of stuff, always searchin and diggin. New stuff: Blues Control from Queens, Wooden Shjips, Carter Tanton’s entire catalog. I’m also real into the recordings of Tom Dowd—an Atlantic engineer in the 50’s-80’s. Invented the faders...recorded Coltrane, Coleman, Clapton, Ray Charles pretty much anyone on Atlantic in those days...all the good shit. Modernized everything. Everyone should watch this movie about him called “The Language of Music: Tom Dowd.” It’ll blow your mind...his level of invention for the history and future of recording. With the Drugs it’s always fun goin on the road and record shopping in every city...maybe finding something for the car ride you haven’t heard in years...Dave picked up Incesticide on the last tour and that was sweet...especially since the exhaust system had fallen off my car and it was the loudest 14 hour drive from Chicago to Philly of my life.

PHW: One of my favorite aspects of Wagonwheel Blues is how it walks the line between something that is easy to hear what influenced it and something that has a unique sound. How did you manage that?

Adam: Well we’re all huge fans of classic songwriting/songwriters so we definitely put The Song first but then there’s always that huge appetite for experimentation, especially improvisation, that is at the forefront of our recordings. I always try and keep the sessions pretty loose...”yo kv, go do a guitar on this.” So he gets a sweet chiming tone out of the amp and just feels the song...maybe it’s the first stab he’s had at it but those are always the keepers—the first impressions. The ‘Taking the Farm’ guitar was a first take and KV didn’t even know the changes but that sort of looseness is what often nails the spontaneity of a performance and the heart of a song. Much of the vocals were semi-improvised…‘taking the farm,’ ‘no urgency,’ ‘show me the coast’ and ‘needle in your eye.’ I’d maybe have a few things written down...a couple lines I thought worked...and would do one or two takes and that’s it. I love hearing mistakes in records—an out-of-tune guitar on a Dylan song, missed cues, flubs, laughs, obvious punch-ins and outs...it gives the music a very human character so I’m never really concerned with getting ‘the perfect guitar part’ or ‘the perfect set of lyrics.’ Honesty and spontaneity in a performance translate better than anything....
------------------------------------------------