For the most part PHW is a non-partisan music/mp3 blog. But not really. The grainy black and white D.C. scenes Eric Wolfson employs in his video for “The Obama Song” - a cleverly reworked version of Ritchie Valens’ classic “Donna” - bring to mind the 60’s and the Washington D.C. protests of that time. Election day is in just 2 short weeks people…
Wolfson’s Dylanesque State Street Rambler still gets spins around here with a healthy degree of regularity, so if you haven’t yet given it a try be sure to check out “Graveyard Girls” and/or the video for “Sleeping Is A Sucker’s Game”.
MP3 :: The Obama Song
---------------------------------- 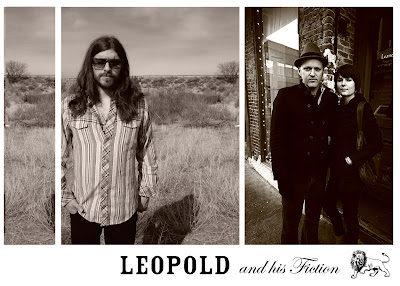 When listening to the blues and folk based rock of Detroit’s Leopold & His Fiction, an association to both The White Stripes and The Black Keys as reference points is fairly inevitable, and, seemingly, already rote. But I find that Ain’t No Surprise, their sophomore effort, never falls into tedium like every Stripes record save White Blood Cells and Get Behind Me Satan, and displays a startling sonic diversity that The Keys only stumble onto occasionally (as on this year’s Danger Mouse helmed Attack & Release). In short, lead singer/songwriter Daniel James has crafted an album that’s enjoyable from start to finish - it’s a gritty, gruff, hard-edged document from an exciting young band. You might even find trace elements of “Tombstone Blues”, Devendra Banhart, and Beggars Banquet-era Stones. All good things…
MP3 :: Come Back (Now That I’m Here)
(from Ain’t No Surprise. Info here)
-----------------------------------------------------
Posted by James at Tuesday, October 21, 2008 No comments:

I can’t say this with absolute certainty, but I have a suspicion that “Rat Patrol & DJs” is the first official video Centro-Matic has ever done. I’m quite possibly wrong about that, and am far too lazy at the moment to check into it. So let’s just go with it how about?

It’s a kick-ass little song, from their, like, 27th straight kick-ass record - Dual Hawks - released last spring by Misra Records. Did I mention that Centro-Matic kicks butt? If you don’t know that yet for yourself you should immediately find out by buying Dual Hawks or Fort Recovery or Love You Just The Same or Distance And Clime or…..well, any of them. Seriously, if you like the song in the video you will basically like every song the band has ever recorded - and there’s a lot of them. What they have lacked in diversity over the years is more than made up for by the kick-ass factor. Get to it. 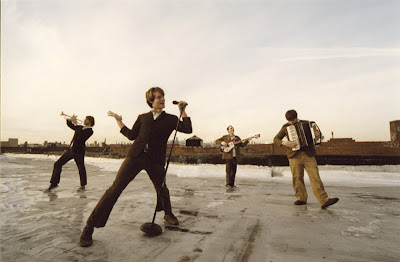 Early last year I wrote about Where’s The Sunshine?, the debut record from Brooklyn’s Creaky Boards. Though the title posed the question, the sunshine was clearly in the bright, memorable melodies that songwriter Andrew Hoepfner coaxed from his songs - a deft mixture of old time rock ‘n roll, Tom Waits’ carnivalesque 80's diversity, and a distinctly New Orleansian spirit. Where’s The Sunshine? was an older release at the time though - dating back to 2005 - so when word came recently that Creaky Boards was preparing the follow up it was very welcome news.
Brooklyn Is Love is the result of the extended break from recording, and acts as an homage to Hoepfner’s home borough (which is easily the best one). The songs shimmer with a Brian Wilson-worthy flair for pop craftsmanship, and Hoepfner proves that when it comes to combining piano-driven indie-pop songs with Beach Boys styled vocal harmonies he is, among New Yorkers, in a class by himself. “The Songs I Didn’t Write” has already gained some notoriety for having a near identical melody to that Coldplay song you secretly kinda like, but was written long before it ever hit the airwaves. It gets the album off to a terrific start, and from there the melodic floodgate is open wide. Check out a pair of tunes and then go spend some of that excess cash everyone seems to have these days:
MP3 :: The Songs I Didn’t Write
MP3 :: Now I’m In The City
(from Brooklyn Is Love. Buy here)
----------------------------------------------
Posted by James at Monday, October 13, 2008 No comments: 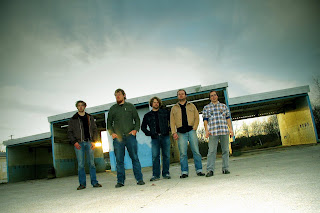 Why so far away guys? Which one's Molina? That promo picture of Magnolia Electric Co. reminds me of that scene in A League Of Their Own when the commercial for women's baseball is showing the pretty girls on Geena Davis' team up close, one after the other, until the really ugly one, who they show from way far away. Still makes me laugh even though I've seen it a half dozen times.
--------------------------------------------
Anyway, it’s been a while since the world has heard much from the not very handsome Magnolia Electric Co. Last year there was the 4-disc, limited edition boxed set, Sojourner, which collected alternate takes, outtakes, and unreleased sessions the band has recorded over the past few years. As usual with Jason Molina’s evocative, if repetitive, songwriting - “moon”, “ghost”, and “blues” references littered the songs to an almost comical level.
Word on the street (promo email from the label) says that Molina has gotten his bandmates back together after a quiet year living in Europe to record an as-yet-untitled follow-up to their last full length - 2006’s slightly snoozy Fading Trails. Molina’s creativity peaked on his final album as Songs: Ohia, 2003’s ferocious The Magnolia Electric Co. That album features some of the decade‘s best blues-rock songs - including the infallible “Farewell Transmission”. Let’s hope the long lay off has revitalized Molina’s muse and that the band kicks out the Crazy Horse-styled jams once again.
Here’s a recently released track from the Sojourner sessions: 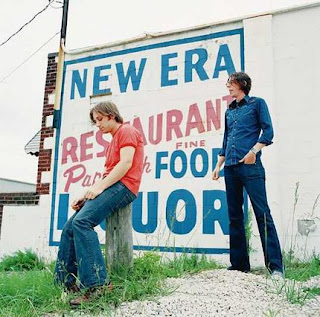 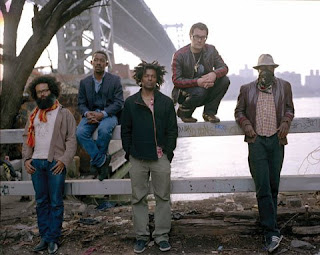 I wrote this post on Tuesday and then proceeded to completely forget about it, thinking I had posted it right away. Starting here > I just heard Gentleman Jesse & His Men’s self-titled debut within the past 2 or 3 days (update: week or so), and if given more time it would have challenged for this spot - it’s pretty freakin’ rad, and I‘ll have more on it very soon (already did - songs of the month. scroll down). But as that record hasn’t yet fully sunk in yet, TV On The Radio’s new Dear Science, has - it’s my official Album of the Month for September, beating out Offend Maggie and Carried To Dust, excellent as they are, by a pretty hefty margin. My early opinion on Dear Science,, and I don’t foresee this changing, is it’s their best yet. Like the TVOTR of the past, Dear Science, is a dense record that grows more rewarding with repeat listens, yet manages to streamline their ambitious nature into an instantly accessible package. If you‘re not hooked 30 seconds into “Halfway Home” I don‘t know what I can do for you anymore. Hear the whole thing here. Previous post here.
MP3 :: Golden Age
(from Dear Science,. Buy here)
----------------------------------------------
Posted by James at Friday, October 03, 2008 1 comment: 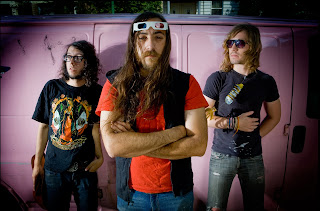