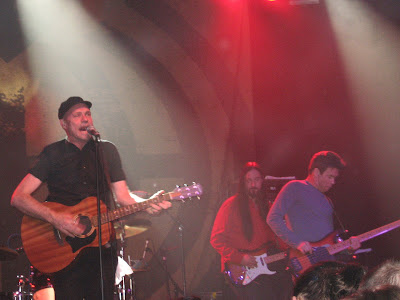 Last Wednesday night at New York’s The Fillmore at Irving Plaza (huh?) The Tragically Hip played the second of 2 sold out shows. It was the band’s first trip to New York since releasing their 11th studio album, World Container, earlier this year, and the rapturous audience (presumably filled with many Canadians loyal enough to make the journey south) clung on every note. Singer Gordon Downie, ever the showman, spent the evening screaming, convulsing, and (attempting to) dance while singing the band’s brand of driving hard rock.
Constantines have bravely faced the uphill battle of opening for the Hip on this Northeast stint of the U.S. tour, and easily lived up to the hype I’ve heard on them over the years as a great live band. I say “uphill battle” because, as some overly obnoxious members of the audience proved, Hip fans aren’t always the most patient bunch. Nevertheless, the band was awesome - holy crap - they really rocked. Is that a review worthy phrase? Set opener “Draw Us Lines” was inspired, and the band hardly relented over the next 45 minutes. They played songs from each of their 3 albums, but focused heavily on 2005’s Tournament of Hearts. The biggest response from the crowd was their faithful cover of AC/DC’s “Thunderstruck”, to which lead singer Bryan Webb quipped “why not?” when the crowd erupted to the opening chords.
MP3 :: Draw Us Lines
(from Tournament of Hearts) Buy from Amazon
MP3 :: Young Lions
(from Shine A Light) Buy from Amazon
MP3 :: Arizona
(from The Constantines) Buy from Amazon
Constantines website, myspace
------------------------------------------------- 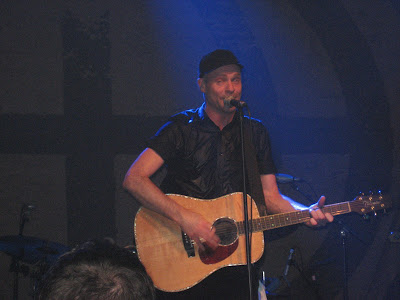 The Hip came out and proceeded to plow through a hearty set comprised of both new songs and old. Having seen them 5 times previously, but not since 2000, there were a few surprising additions to the set. “Boots Or Hearts” and “Locked In The Trunk Of A Car” are 2 of my favorite early songs, and both were unexpected and welcome. The band hit many of their most famous songs, including a crisp and compact “New Orleans Is Sinking” (oddly introduced by Downie saying “New Orleans is sinking and I don’t want to help”. Hmm…seems maybe a bit insensitive in this day and age Gord) and a long, drawn out rendition of “At the 100th Meridian”, whose jammy middle section and sped-up ending were somewhat anticlimactic after the song’s blistering first 1/3. These moments were just 2 of the highlights: “Scared” and “Bobcaygeon” were nailed, with Downie adding an acoustic guitar to bring out the folk influence on the tunes. “It’s A Good Life If You Don’t Weaken” and “My Music @ Work” were also noteworthy. Best of all, the new songs from World Container seemed to fit right in with the older material, and may stay around in setlists for a long time to come. 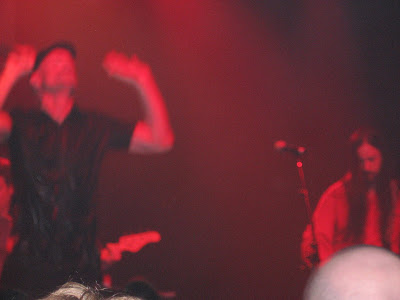 I have to say though that the stage antics of Downie have seemed to grow somewhat tiring over the years. They came off, at least in my eyes, as shticky and overdone at Irving Plaza. The band performed a fierce version of “Grace, Too”, perhaps my favorite song to hear live by any band, that was continuously distracted by shrill screaming from Downie that was entirely unnecessary. I guess the line from “My Music @ Work” proved prophetic - “the dim possibility of showing some restraint” - Gord, sometimes it’s ok to let the music stand on its own. He mellowed out as the set progressed and as he played more acoustic guitar. Unfortunately though, his on-stage persona is also thoroughly insincere - even the end of the night “thank yous” came off as sarcastic instead of heartfelt. Overall though the crowd left happy, the sounds and words of the Tragically Hip’s mini-Canadian national anthems filling the New York streets.
MP3 :: Grace, Too (Live)
MP3 :: Fully Completely (Live)
(from Live Between Us) Buy from Amazon
The Tragically Hip website
---------------------------------------
Posted by James at Wednesday, May 02, 2007

I was at the Tuesday night show. Not exactly the same set list, but I also liked the new stuff. Sounded good, worked well. He does make you appreciate the more appreciative bands/frontmen. And did you have a million very drunk Canadian frat boys? Oh, Lord, I love a good crowd, but it was like being at a college show.

Not really a Tragically Hip fan but I would do anything to see the Constantines!