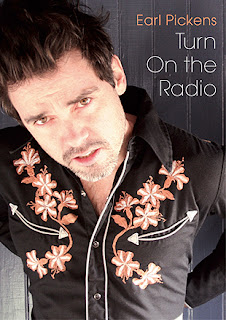 Can you think of a better name for a country musician than Earl Pickens? Me neither. Merle Twang comes close. The Reverend Jedediah P. Houston isn’t too shabby either. Both used to play regularly in Earl’s backing band, the infamous Black Mountain Marauders. If you are lucky enough to catch them on their Good Riddance Tour (i.e. - playing one or two reunion shows a year at NY’s Rodeo Bar), then you absolutely should. A true group of showmen in every sense of the word, Earl and the band come on like a down-home E Street Band, mixing raucous drunken country-rock, heartbreaking folk-infused balladry, and a few steadfast covers of the classics with engaging stage antics and humor. Their music is a playful kindred spirit to Wreck Your Life-era Old 97s, at once equally charming and fun.

A few years ago Earl decided to get away from the hustle and bustle of Brooklyn and settled down into the comfortable confines of Central Pennsylvania. He signed on with Brooklyn’s Kill Buffalo Records, dropped the rowdy, semi-ironic country style of his old band, and released 2005’s Country Music Jukebox. The album proved Earl belonged in the upper echelon of singer-songwriters working in the Americana genre, as he received substantial radio-play on New York’s WFUV and Philadelphia’s WXPN. The album is purposefully plaintive, rarely offering more than an acoustic guitar and Pickens’ Lyle Lovett-esque crooning, along with the beautiful harmonizing of Jessie Yamas. When it does add more, as on album opener “Come On Up And Haunt Me Tonight’s” mandolin break, the results are immediate and breathtaking. He followed the album in 2006 with the EP When Earl Was 17 It Was A Very Good Year, which consisted of, you guessed it, newly recorded versions of songs Earl wrote when he was 17. Short and sweet, the EP showed the songwriter had a knack for a good tune even as a young outlaw.

Pickens has recently released the proper follow up to Country Music Jukebox, again coming via Kill Buffalo. Turn On The Radio at once presents the same type of whip-smart, instantly catchy songs of Country Music Jukebox, but this time Earl is augmented by a group of professional session men who add a slicker, more radio-ready sound. The set was recorded deep in the hills of Central Pennsylvania, and was produced by Brett Alexander of The Badlees. The songs are decidedly more lively than his last offering and recall the classic country that very obviously seeps through Earl’s bones, as well as a real knack for pop hooks. “Can I Turn On The Radio?” is the infectious first single, bounding along like an ode to the shining sun, wind in your hair, and blooming trees breathing in reverse. It may be the perfect soundtrack to a long springtime drive - top down, blue skies, holding hands, and singing along.