Dinosaur Jr. - Back from Extinction 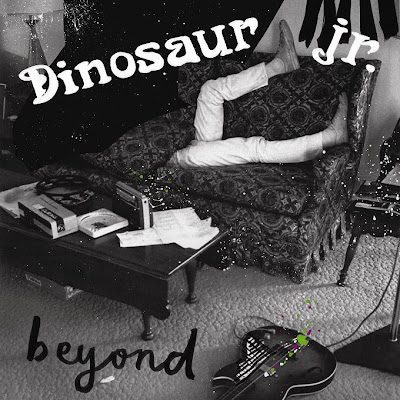 Dinosaur Jr. is back, and with a vengeance. This week the heroes of the 80’s underground and 90’s alt-rock released Beyond, their first album of new material with all the original members since 1989’s Bug. I wasn’t even born yet in 1989. On Beyond the band deftly sidesteps the trap of trying to appeal to the casual fan who bought Without A Sound in 1994 because they saw “Feel the Pain” on MTV (don’t get me wrong, a cool song and great video, but was far past the prime of the band), and instead focus on ripping through a true set of scorchers. This is J. Mascis, Lou Barlow, and Murph sounding raw and rejuvenated, enjoying playing together for the first time in years (maybe ever), and showing those still wet-behind-the-ears indie bands how it’s done.
“Almost Ready” kicks off the album right, sounding like it was dug out of a time capsule left circa 1988, sometime between You’re Living All Over Me and Bug. It has the patented creaky melodies and frantic, piercing guitar sounds of those prime 80’s albums, yet is propelled along by a more forceful and focused rhythm. “Crumble” is second, coming in more laid back than its predecessor, and recalling a tighter version of Green Mind-era Dinosaur Jr. “Pick Me Up” continues the reunion party, and goes on for 6 epic minutes (yeah, there’s some guitar soloing happening here) and has that sludgy rhythm sound that defined the band for so long. Most of the rest of the album swings between these styles, and most works very successfully.
There are other highlights as well: “This Is All I Came To Do” and “Been There All The Time” are hard-driving melodic rock, “We’re Not Alone” is perhaps the finest country-influenced song in the band’s catalog (or at least since “I Don’t Think So”), and “I Got Lost” recalls Where You Been’s haunting “Not The Same”, full of brooding acoustics, rolling tympani, and Mascis singing in that frighteningly high voice he is capable of. Lou Barlow even gets lead vocal duty on 2 songs, and although not entirely necessary, his songs fit in nicely within the flow of the record. Now, not every word I’ve written in this post has been 100% true (duh, I was so totally born before 1989), everything I’ve said about Beyond is on the money. I’m really digging this new album, and am so happy that Dinosaur Jr. have returned after so long with a record that actually adds to an already classic back catalogue.
MP3 :: Been There All The Time
MP3 :: We're Not Alone
(from Beyond)
--------------------------------------
And be sure to check out the video for “Been There All The Time”, featuring a cameo from Sonic Youth’s Thursten Moore: