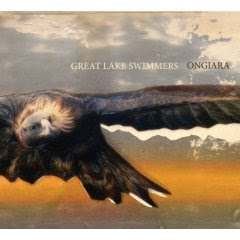 As previously reported, Toronto’s Great Lake Swimmers released Ongiara yesterday. The record is the third full length of the band’s career, and is named for the Toronto Harbor boat that brought the band members (singer/songwriter Tony Dekker, Erik Arnesen, and Colin Heubert) back and forth from home to a recording studio on Toronto Island. The band has made a name for themselves through their sparse acoustics and heavy reverb, and this album doesn’t stray too far from the band’s established comfort zone. Featuring little more than delicately strummed acoustic guitars, banjo, and some lightly brushed percussion, the songs stand on there own due in large part to Dekker’s continually sublime melodies, as well as the spacious production and arrangements that runs throughout the album’s 10 tracks.

The somber, atmospheric folk songs continually conjure natural images. In fact, if there is a unifying thread at work here it seems to keep pretty close to man’s symbiotic relationship with nature, and using those natural images as metaphors for the interpersonal. For instance, the album’s focus track and opener, “Your Rocky Spine” uses it’s scenes of the Canadian Rockies as a springboard for a sensual tour of the female body. In fact, everything from the artwork to the lyrical imagery to the campfire feel of the music lends itself to this rustic setting.

The early press has been favorable, especially Paste magazine’s recent 4 ½ star rating, and deservedly so. Great Lake Swimmers have crafted a fine folk record that at its best is beautiful and stirring. Several songs, such as “Catcher Song” and “I Am Part Of A Large Family”, stand up with the best folk music I‘ve heard this year. The rest of the songs work together to create a unified mood piece, perfect for those creaky Sunday mornings when laying around on the back porch is easily the best option.