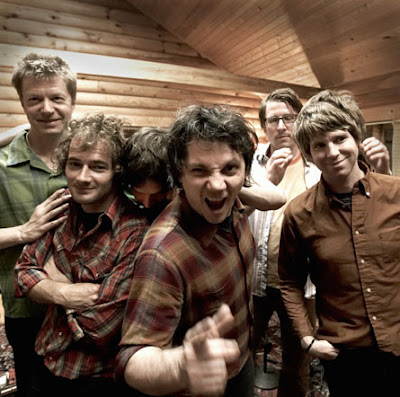 Wilcoworld announced today that if you're one of those rabid fans that actually, you know, supports the artists by buying their albums (and according to Billboard there are lots of you) then you are entitled to a FREE download of "The Thanks I Get". The track is a new recording of a very popular song that has been in rotation live on Wilco/Jeff Tweedy setlists for quite some time, and honestly SHOULD HAVE BEEN ON THE ALBUM INSTEAD OF "SHAKE IT OFF"!!!!!!!! Sorry, I didn't mean to yell, but seriously. Talk about "making it better" - duh!
Here's a live version done on the Conan O'Brien Show last summer. I'd share the new version with you, but then I'd look like the "guy who tells you to buy something and gives it away for free". Just imagine the song having a less-pronounced organ during the beginning, and more pronounced backing vocals toward the end. And sorry, no Conan sounding like an (honestly) excited fanboy.
--------------------------------------
MP3 :: The Thanks I Get (Live)
(recorded live on The Conan O'Brien Show)
--------------------------------------

Yeah, I can't understand why "Shake It Off" is on the album over the awesome studio "Thanks I Get."