"We'll Cut Our Hair And Fake Our Death" 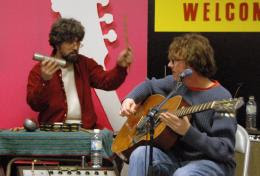 Last year Califone released one of my favorite records of 2006 with the stunning Roots & Crowns. But this wasn't my first experience with the band. I was first overwhelmed by Califone when they opened for Wilco at a show in the Fall of 2002. The stage that night was crowded with musicians making one hell of a noisy and experimental racket, yet it was undeniably rooted in folk music. There was barely anything in the way of traditional song structures, but it made a deep impression on me nonetheless.

Soon after, the band released Quicksand/Cradlesnakes, an album that earned positive comparisons to Wilco’s classic Yankee Hotel Foxtrot, and one that captured the feeling of watching them play that night before a sold out crowd. If Wilco was stripping its pop songs to their bare essentials and building them up into exciting new shapes, then Califone was doing the same to its folk music, layering laptop effects and tape loops on top of the purest of roots music. It turned out to be my second favorite album of 2003, right behind The Wren’s The Meadowlands.

The album begins with a minute of low feedback, quiet and spacey and called “One”, which segues into the piano led “Horoscopic.Amputation.Honey”. The song begins inauspiciously with some tinkered piano, and gradually adds more and more instrumentation- slide guitar, percussion, sound effects- all the while relying on the piano to guide it through its slow-folk haze. Tim Rutilli’s words don’t seem to make literal sense, instead they evoke images that bleed in with the music - “in and out of sleep/even with the rise and fall” and “shake your stars” and “buzzing like a worn out fret/we cut our hair and fake our death”. The song’s final third acts as a counter to its opening. Around the four-minute mark the music nearly drops out entirely, leaving just the piano and noise effects. Slowly a very different bass line enters, more melodic and faster than anything that has come before, as well as drums that are providing an actual beat. The noise swells over its new base, and Rutilli comes back in repeating a new set of cryptic lyrics - “amputated years are growing back a new shade”- that somehow provide a sense of triumphant closure to the song’s controlled chaos. This is one of my favorite songs of the last few years, and a wonderful introduction to one of the music world’s best indie-folk acts.