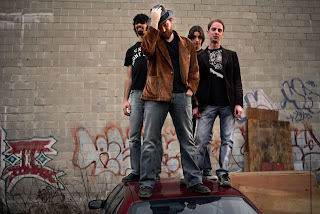 A few weeks ago I was invited to attend a very intimate showcase of music at Foil Studios in Williamsburg, Brooklyn. The event was a teaming up of Galuminum Foil Productions and Local Correspondents, and was called P.S. 318: Warehouse Songs, Vol.1. The night brought together some of Brooklyn’s best up-and-coming young songwriters, each performing a short set of their best material in front of a small audience. The 2-night event saw 8 artists play for about a half-hour each, and was recorded using the studio’s state of the art equipment. The plan is to eventually pare the recordings down to 16 songs (2 per artist) for a compilation to be released this summer.
That night I met Chris Cubeta, the owner of the studio and a fine recording artist in his own right. He gave me a copy of his 2006 album Faithful, and I’ll be damned if I haven’t been hooked on it now for a few weeks. I guess owning and operating your own studio allows you the luxury of having the best quality production on your records, and Faithful has it in spades. Featuring Cubeta’s ace backing band The Liars Club, the album contains 13 songs of the highest fidelity. At times reminiscent of the best of Counting Crows and John Hiatt, Faithful is a strong collection of radio-ready, passionate roots rock and roll. Cubeta has the unique ability catch that restless feeling of watching your youth fade away out the rearview mirror. His songs long for the good old days gone by, but make the best of dealing with the difficulties of adulthood. They are layered in varied instrumentation and sweet melodies, but are spacious enough to invite multiple listens. At their best, as on “Clementine” and “Don’t Worry”, the characters and stories are so sharply written you almost feel like he’s singing about folks you know. And he probably is…
MP3 :: Clementine
MP3 :: Don’t Worry
(from Faithful)
-----------------------------------
According to Chris’s BIO:
“While his lyrics combine nuance-soaked imagery with a brash, incisive point-of-view, Cubeta’s sound is equally eclectic, combining the wispy, sensitivity of the singer/songwriter with the unbridled thrill of rock and roll. Faithful is an artistic declaration, full of offbeat characters, ecstatic revelations and unfiltered emotion. It is the kind of record that unabashedly announces the arrival of a new and necessary young artist whose urgent and desperate approach to songwriting is all too rare in contemporary music.”
-------------------------------------
You can stream Faithful by visiting Cubeta’s WEBSITE
-------------------------------------
And it is available for purchase HERE or from Sonic Bids
-------------------------------------
Chris will be playing solo at The Living Room on June 6
and w/ The Liars Club at The Bitter End on June 7
-------------------------------------
Previous "Talkin' New York" features:
Wakey!Wakey!
Matt Singer
Creaky Boards
-------------------------------------
Posted by James at Thursday, May 24, 2007

Cool blog, i just randomly surfed in, but it sure was worth my time, will be back

Deep Regards from the other side of the Moon