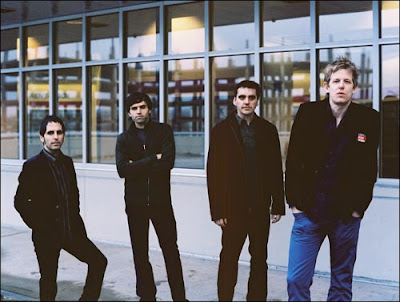 Here’s the rest of my Spoon rarities list, this being my 5 favorites. As for defining what I considered eligible for this list (because all of these songs are available to any die-hard who's willing to look around a bit) - basically I thought any Spoon song that hasn't appeared on one of their (soon to be) 6 studio albums. In case you missed Part 1, check it out HERE.
Again, I didn’t include the Soft Effects EP on this list for 2 reasons: a. because it was just reissued last summer and is widely available now after years out of print, and b. because it’s so good that it would unfairly dominate this list.
5. MP3 :: Monkey Feelings
“Monkey Feelings” is another strong song from the Gimme Fiction-era, this one on the “Sister Jack” import CD-single. All the extra songs from this era make for an interesting argument that Gimme Fiction, good as it is, could have been better if some of the lackluster last few songs were replaced with the b-sides. “Monkey Feelings” is a fun, catchy little pop song that doesn’t try to be anything more.
4. My First Time Volume 3
Another iTunes exclusive, so sorry, I can’t provide it as an MP3. But this one is similar to “I Turn My Camera On” in that it grooves like some sexy kind of Prince song. Britt Daniel uses the falsetto voice that he’s been utilizing more over the past few records to wonderful effect, and the band is just flat-out tight. Go spend the $.99 already.
3. MP3 :: Chips And Dip
This song comes from the Love Ways EP, which came out before 2001’s Girls Can Tell despite being recorded after it. The EP served as a way to get Spoon’s name back into the indie-public after the long hiatus (read: label issues) that stemmed from their being dropped by Elektra after A Series of Sneaks. The song is an elegant, melodic departure from the early Pixies-influence, featuring an atmospheric arrangement that relies on piano and moody strings more than frenetic electric guitar. Perhaps the first glimpse at the bold sonic steps Spoon would take over their next few records.
2. MP3 :: Carryout Kids
“Carryout Kids” was a bonus track that came with Gimme Fiction (man, what a productive time period!). The slight distortion in the vocals gives the song a franticness that reminds me of “Small Stakes” (from Kill The Moonlight), and there is something about the raw, demo-ish, basement-experimentation that reminds me of The Replacement’s classic “Answering Machine”.
1. MP3 :: I Could Be Underground
I’m breaking from the prolific Gimme Fiction-era pattern here with this song from the 30-Gallon Tank EP. This early song showcased the best of what Spoon was capable of at the time (angular guitar-driven rock, melodic repetition, etc.) and forecasted much of what would come later - there’s that voice that sways effortlessly into a killer falsetto, the ultra-smooth chorus, and a rhythm section that would soon be showcasing more diverse influences. Like “Chips and Dip” or A Series of Sneak‘s “Advanced Cassette”, this song (less overtly) predicted new directions for the band while still adhering to what made them great in the first place.
Posted by James at Thursday, May 31, 2007

Thanks a lot for these. "I Could Be Underground" is also on the 12XU version of A Series Of Sneaks.

Your welcome Kurt, glad you enjoyed! Btw - what is the 12xU version of ASOS? Only familiar with the Merge reissue w/ the Laffitte songs....

I thought I was die-hard! I guess I wasn't willing enough to look around a bit. Thanks for these tracks. I had some of them, but most are new to me. It's so exciting for me to find new Spoon. HypeMachine is an excellent tool to find great MP3 blogs.