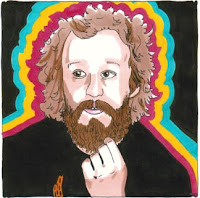 Daytrotter consistently offers up really nice live sets from some of indie-rock’s most promising up-and-comers, but has really been on a roll as of late. Back in 2005 Phosphorescent dropped the spectacular Aw Come Aw Wry. Singer/songwriter Matthew Houck is the Phosphorescent brainchild, and possesses a cracked Southern drawl of a singing voice (and when I say ‘cracked’ I mean split right down the damn middle) that recalls Will Oldham. His songs are achingly beautiful little epics, battered and bruised and filled with hurt, like a less peculiar Neutral Milk Hotel in slow motion. These sessions skip the older material (except “Little Parts 1 & 2, which is from 2003’s A Hundred Times Or More) in favor of new material and a cover of a traditional folk-blues tune. As Pitchfork raved recently, the highlight is “Cocaine Lights”, which is from their as-yet-untitled next record, but also features a lovely version of “Worried Blues”, which appeared on Bob Dylan’s Bootleg Series, Vol. 1. A must hear….. 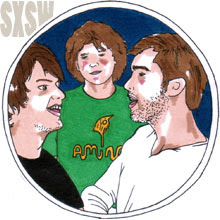 And then came word of their recent sessions with Austin’s Voxtrot. The band’s self-titled debut was released last week and is getting plenty of spins around here these days, even if it doesn’t quite live up to the promise of their 3 outstanding EPs. For Daytrotter the band recorded the standard 4 songs, playing 3 songs from the new album (including the fantastic “Kid Gloves”) as well as “Soft & Warm” from the Mothers, Daughters, Sisters & Wives EP. Check out these fine live recordings as well:
MP3 :: Steven
MP3 :: Soft And Warm
MP3 :: Kid Gloves
MP3 :: The Future Part 1
---------------------------------------
Posted by James at Tuesday, May 29, 2007

Daytrotter is great. I just discovered Phosphorescent there and went and bought Aw Come Aw Wry which I can't stop playing. Also Aloha had a good session there recently.

Thanks, I'll have to check it out!