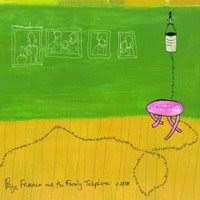 Page France is a band that has slipped quietly under my radar over the past few weeks. I’ve seen their name on more than a few of my favorite blogs, even heard a few songs here and there, but somehow just never found the time to give them the good listen they deserved. Until today. Like a magician pulling a rabbit from his hat, Page France have dropped a fascinating record seemingly out of nowhere. Their new album, …and the Family Telephone, was recently released through Suicide Squeeze, and is just brimming with their catchy and quirky take on folk-rock. It’s the band’s third full length release, following 2006’s Hello, Dear Wind and 2005‘s Come, I’m A Lion!.

The band plays it loose and the melodies come quick and easy throughout the generous 14 song set. Their gentle, swaying take on folk-rock can recall the friendlier side of The Velvet Underground - that is if Lou Reed consistently sucked helium and grew up as a circus child. “The Joker’s Joke” starts of with a simple, repetitive acoustic guitar line and lead singer Michael Nau’s endearingly nasal voice, but soon enough takes twists and turns to suggest that they may be equally influenced by falling into rabbit holes as traditional American music. On the song Nau spins a whimsical tale full of strange imagery about magnets, magic, bones being thrown, jokers, beggars, and who knows what else. Similiar charmingly odd-ball images pop up throughout the record. I haven’t psychoanalyzed his words yet, but the dude must imagine in cartoons.

You can also stream …and the Family Telephone over at AOL’s new Spinner website HERE.