In Rewind: The Second Band 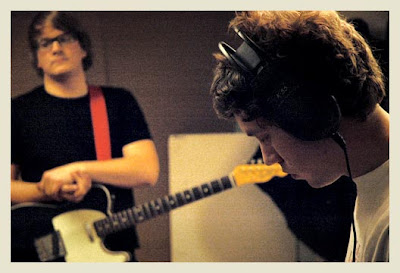 Let’s play a game. Take a listen to any of The Second Band’s mp3s provided below and see if you can guess where the band is from…. Go ahead.

If you listen to “Bellystings & Sunshowers” you may say “oh, they’re from Austin, TX. They may even owe Will Sheff back rent for the basement apartment they’ve been hiding away in downstairs from Okkervil River’s recording studio. Hell, they may sneak up there when the band’s on tour and use their equipment”. Cold.

If you hear “What’s Up, Tiger Lily?” you may bet your life they were from Omaha, NE and were childhood friends with Conor Oberst. They’re the ones Conor never mentions in interviews because you may never listen to him again. Still cold.

Going by “A Song I Can’t Recall” you might say they used to get drunk and shoot off firecrackers with Ryan Adams and Caitlin Cary under blankets of North Carolina stars. They may have even opened for Whiskeytown once, and Ry-Ry starting copping their singer’s delivery. Well, this would be your warmest guess yet, but you’re still miles (and miles and miles) off.

There is something distinctively American sounding in The Second Band’s songs, yet they can’t really be tied to one particular place very easily, can they?. If you’ve given up then let me help you out. The Second Band is from the decidedly un-American country known as Sweden. It’s on the other side of the Atlantic Ocean somewhere, and not even remotely close to any of your guesses, silly. Better luck next time. I found this band in a recent post over at The Punk Guy, and was immediately taken with the songs, and felt the need to share them.